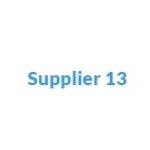 Supplier 13 was established in 1995. Since its establishment, it has been adhering to the enterprise mission of "serving the country" and has now developed into a large-scale diversified enterprise group integrating three major industries of daily chemical, food, and tourism real estate. The company first took the lead in launching the phosphorus-free and aluminum-free washing product in China, which became the first washing product in China to obtain environmental label certification. It has been selected as the deputy director unit of China Washing Products Industry Association for four consecutive years and has won two industry-leading enterprise awards. At present, it has obtained dozens of patents with many products having filled domestic gaps, and many projects being listed as torch programs. Supplier 13 also participated in the formulation of a number of national and industry standards, becoming a successful role model for industrial upgrading. At the same time, relying on the two major production R & D bases in China and the United States, it has completed the industrial layout from family to personal care, from the public to high-end, and from professional to unique individual needs.